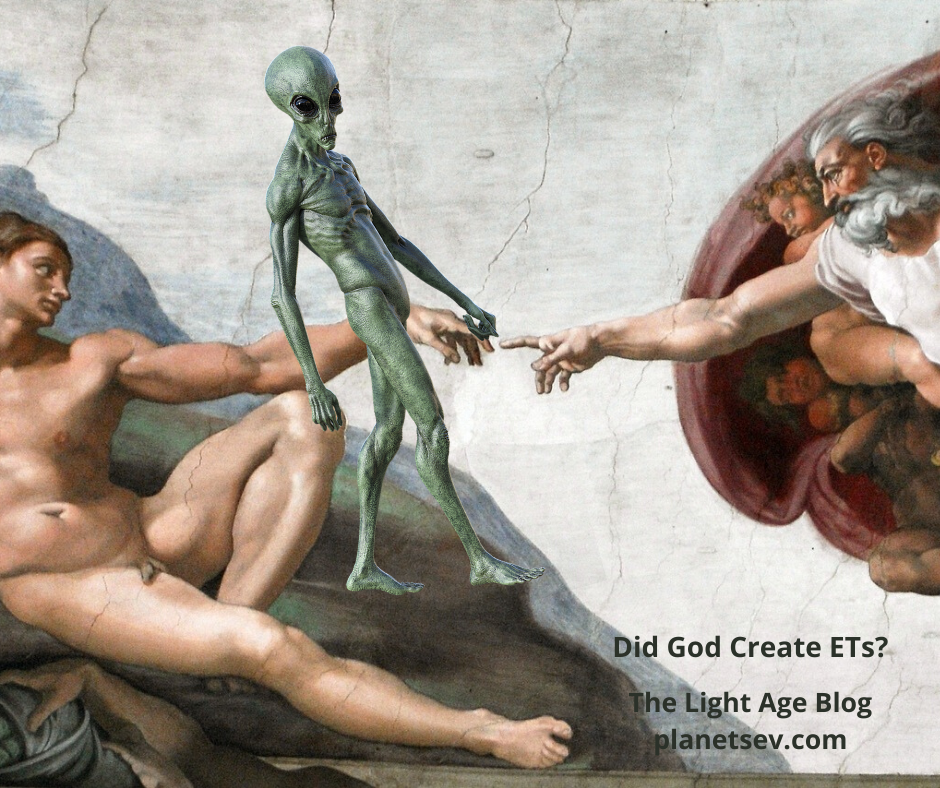 So God created man in His own image; in the image of God He created him…
Genesis 1:27

I cannot write this blog without writing about religion because it is a primary reason why we don’t know the truth about our connectedness to life-forms on other planets and dimensions.

My goal is to keep these posts short. I cannot get into ALL the questions, thoughts, theories in one blog. My purpose for doing this is to simply throw out ideas for you to ponder, agree with or disagree with. I like to think of these posts as Mind Exercises. It is good to exercise the mind by thinking about things you may not normally think about. Maybe these posts may provide validation for you, maybe some guidance….maybe nothing…

If you are religious (you are probably not reading this then) I am not judging you. I honestly believe to each his own. If religion helps you live your life in a more peaceful manner, helps you love yourself and be loving to others, that is beautifully powerful.

I can see the positive aspects of religion. I can see the negative ones, too. After all, all religions have been written by humans – it doesn’t matter what God or Deity gave the message – it was filtered and altered by humans so that a certain few are Holy and High. The Pope is not any closer to God than you are. You want to touch God’s energy? No need to touch the Pope or The Dalai Lama. Touch yourself.

And this is real:

Yes, yes I have read and heard about The Vatican admitting ETs exist, but has it edited the Bible to include it?

There are 2.5 billion Christians in the world, 2 billions Muslims, 1 billion Hindus, 15 millions Jews…85% of the people on the planet adhere to a religious construct.

If the basic tenets of a religion include a Powerful Being insisting you do things to appease it to go to Heaven, that is a fear-based religion. Most of our religions are fear-based which means billions of us are afraid to think and behave freely. This is the crux of the Disclosure issue. Billions of people refuse to think freely for fear of punishment. You know how hard this makes it for Experiencers to come out? Are you aware how incredibly brave it is for an Experiencer to publicly tell their story? Experiencers aren’t crazy, they are kick-ass, courageous warriors. Yes, warriors because we are fighting the pervasive energy of fear on our planet.

I believe there is a nonjudgmental force of energy running through us all. As this force touches upon something, it sparks life. There are different types of life: human, animal, flower, rock, water, ET. They all have this force running through them, organizing their cells in a sacred manner, hence Sacred Geometry. Maybe Sacred Geometry is the scientific definition of God.

I do not believe that God is a human-looking being who consciously determines what type of creature it creates. So, I do not believe God created us in his physical image, because it doesn’t have facial features. I simply believe God is the energy of love coursing though all. If energy can be defined as an image, then everything inherently represents God’s image.

Many Experiencers are given information about God/Universal Force. Some feel the Force moving through them while with ETs. I have felt this Force from a Blue Being. It is a massive energy of Love. It is deeper than the love you feel from your mother. It is Love I have felt from no other human. This Blue Being came to me while I was awake, sitting in my living room. According to my definition of God, I believe the Blue Being is in God’s image. So too the Greys. So are all ETs.

I am not saying you can’t be religious and believe in ETs. Of course you can. And that is blurring the lines of religion. BLUR PEOPLE BLUR!

As the boundaries of fear-based religions blur to allow freedom-to-be without eternal punishment, which is basically what Spirituality is, we will lose the grip fear has on us. And if we are not fearful, we can accept humans, cats, eagles, whales, and Greys are all in the image of God.